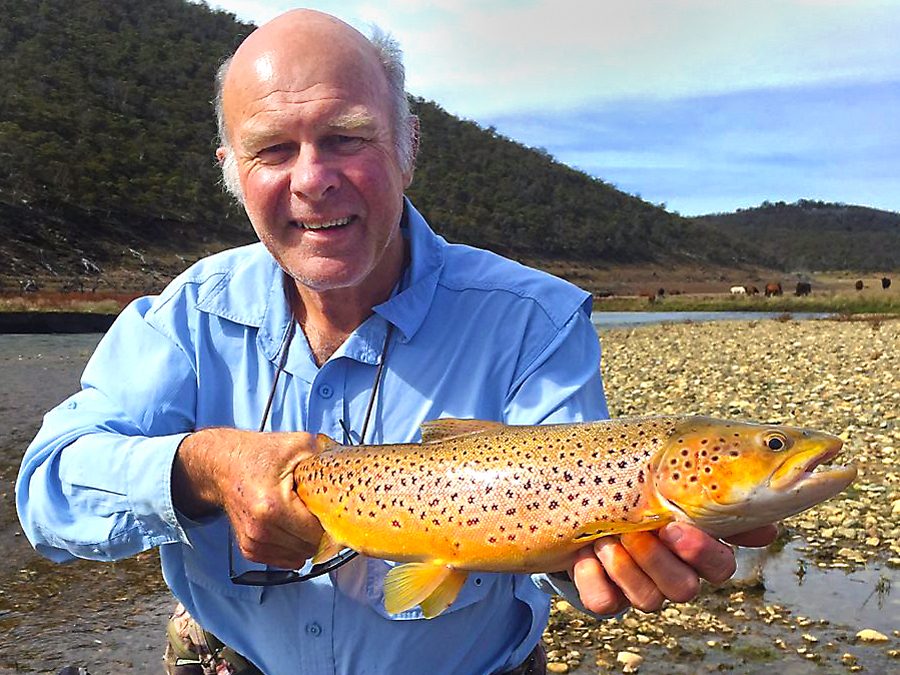 President of the Monaro Acclimatisation Society, Steve Samuels with a quality Snowy Mountains’ trout. “We are determined to protect the quality of the Snowy Mountains trout fishery from redfin and this announcement is a critical step in that process”, he says.

Over the last three years the Monaro Acclimatisation Society Inc (MAS), the main fish stocking organisation in the Snowy Mountains and Monaro, has been negotiating with Snowy Hydro for a recreational fishing offset as part of the Snowy Hydro 2.0 project.

,,When the Snowy Hydro 2.0 project was announced by former Prime Minister Malcolm Turnbull in March 2017, the MAS became concerned that the redfin perch pest species would be pumped from Talbingo Dam into Tantangara Dam, which so far is redfin free. Redfin are a Class 1 noxious fish in NSW. The MAS was also concerned that redfin would then spread from Tantangara Dam into the redfin free waters of the upper Murrumbidgee River and Lake Eucumbene.

Various scientific studies have identified that redfin perch have the capacity to degrade a trout fishery within a short time due to their ability to prey on smaller and newly hatched trout. Because rainbow trout only live for about three years, the fishery can decline quickly if there is no recruitment. Stocking the usual smaller fry or fingerling trout is ineffective as they are just the right size for redfin to prey on.

Negotiations with Snowy Hydro culminated in the MAS recreational fishing offset comprising of a trout grow-out facility being included in the Environmental Impact Statement for Snowy Hydro 2.0. This facility is designed to grow a significant number of trout up to 200 mm or yearling size. At this size they are too big for the majority of redfin to prey on.

On Monday, 25 May 2020, the Snowy Hydro Main Works Assessment Report was released with a requirement that Snowy Hydro invest $5 million over 5 years for the construction of a salmonid grow-out facility, which will allow for the stocking of larger trout.

President of the MAS, Steve Samuels said “Producing trout to a more robust yearling size will give us the best chance of ensuring the Snowy Mountains trout fishery is not decimated by redfin incursion.

“There is a general consensus among anglers that the yearling trout could also be used to improve the fishing in other Snowy Mountain waterways” he said.

While these negotiations have been between the MAS and Snowy Hydro, the concept has now been developed to a point where the MAS is seeking co-operation from NSW Fisheries to help progress the project. The MAS has always approached this project on the basis that it is developed within the Snowy Region and operated as an annex to the Gaden Trout Hatchery.

Mr Samuels also mentioned that other authorities would need to be consulted over time, such as the Snowy Monaro Regional Council, environmental bodies and of course there will need for consultations with local communities once a location was settled upon.

“The use of larger trout to stock redfin-dominated waters has been practised by the Victorian Fisheries Authority for many years with great success”, Mr Samuels said. “Our problem is that Gaden Trout Hatchery needs significant investment to increase its capacity to grow the required numbers of larger fish but will still be limited by its water supply; an additional off-site trout grow-out facility such as we are proposing meets that purpose very nicely”, he said.