Nestled in the rugged, heavily-forested mountain ranges behind Bermagui, on the far south coast of NSW, lies a small, man-made impoundment that provides some excellent bass fishing.

Impoundment fishing for Australian bass continues to boom through a vast, crescent-shaped swathe of the nation’s south east, stretching from western Victoria to central-southern Queensland.

While the heartland of put-and-take bass fishing is definitely centered on south eastern Queensland and northern NSW, there are some interesting bass lakes further afield that produce rewarding results for keen bass anglers. These include the likes of Blue Rock and Glenmaggie in Victoria’s Gippsland, and Lake Lyell, west of Sydney’s Blue Mountains. However, there’s another small and often overlooked impoundment in south eastern NSW that has actually been producing consistent bass fishing results for many years, and attracting a dedicated band of fans who tend not to say too much about the place. It’s one of the closest public bass lake to Canberra, an extremely picturesque and family-friendly destination, perfect for canoes and kayaks, and also one of the few bass dams offering reliable, accessible land-based action. Its name is Brogo Dam. 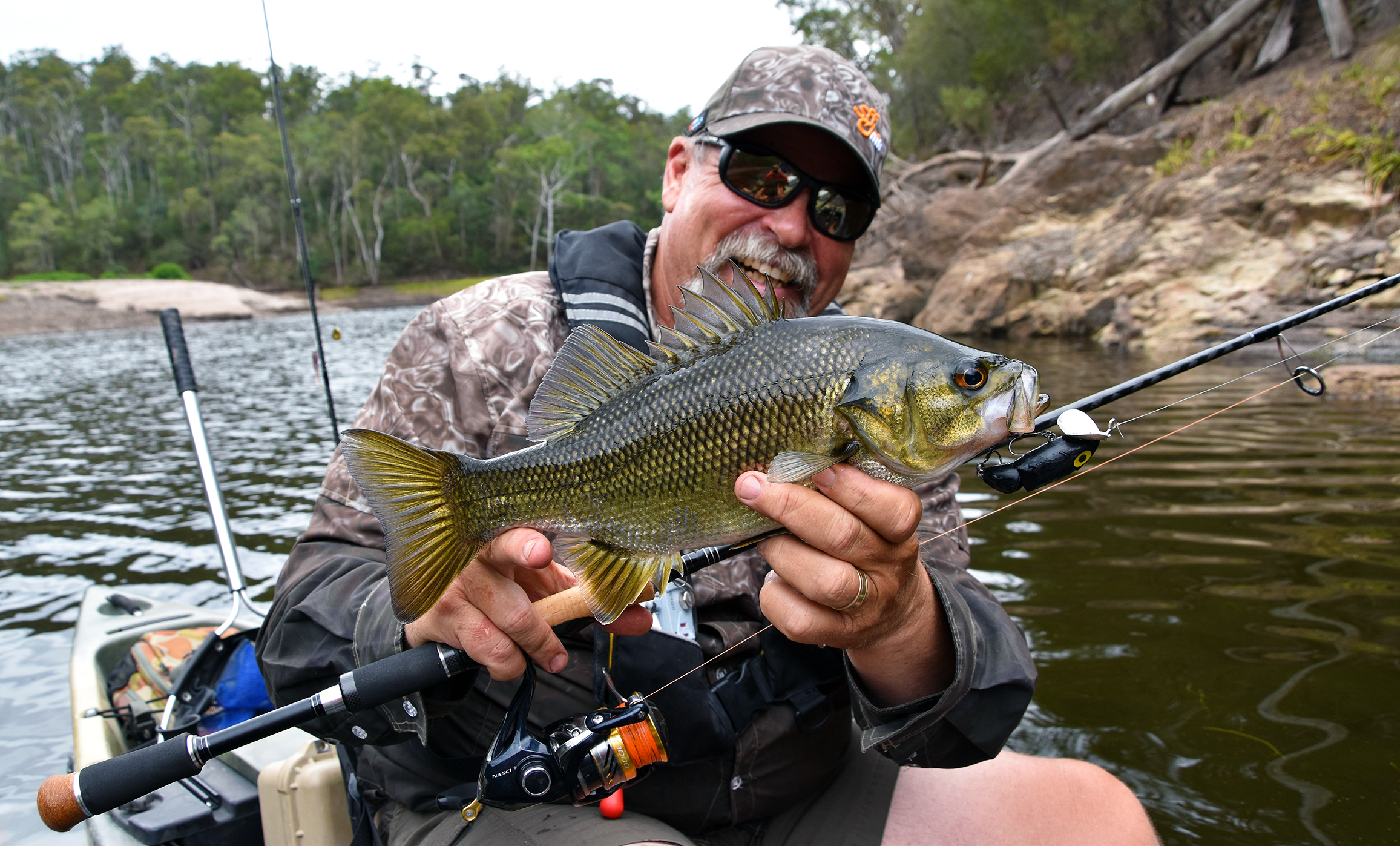 “This is a delightful little fishery nestled in some truly magical country… Twenty fish days are far from uncommon here during summer, especially if the weather is kind and the barometer high.” 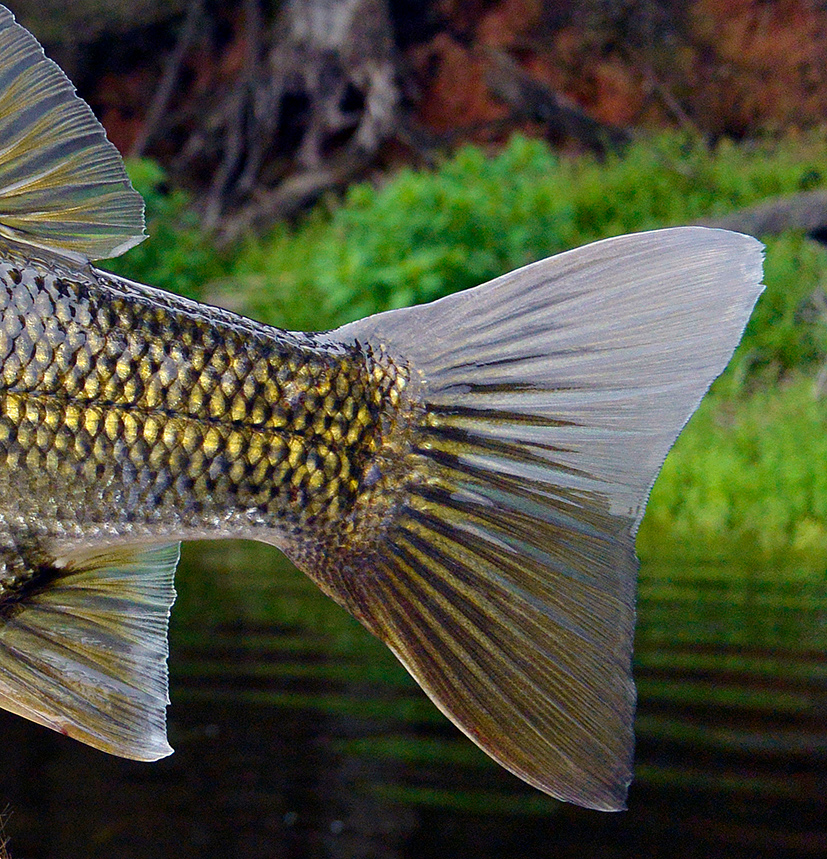 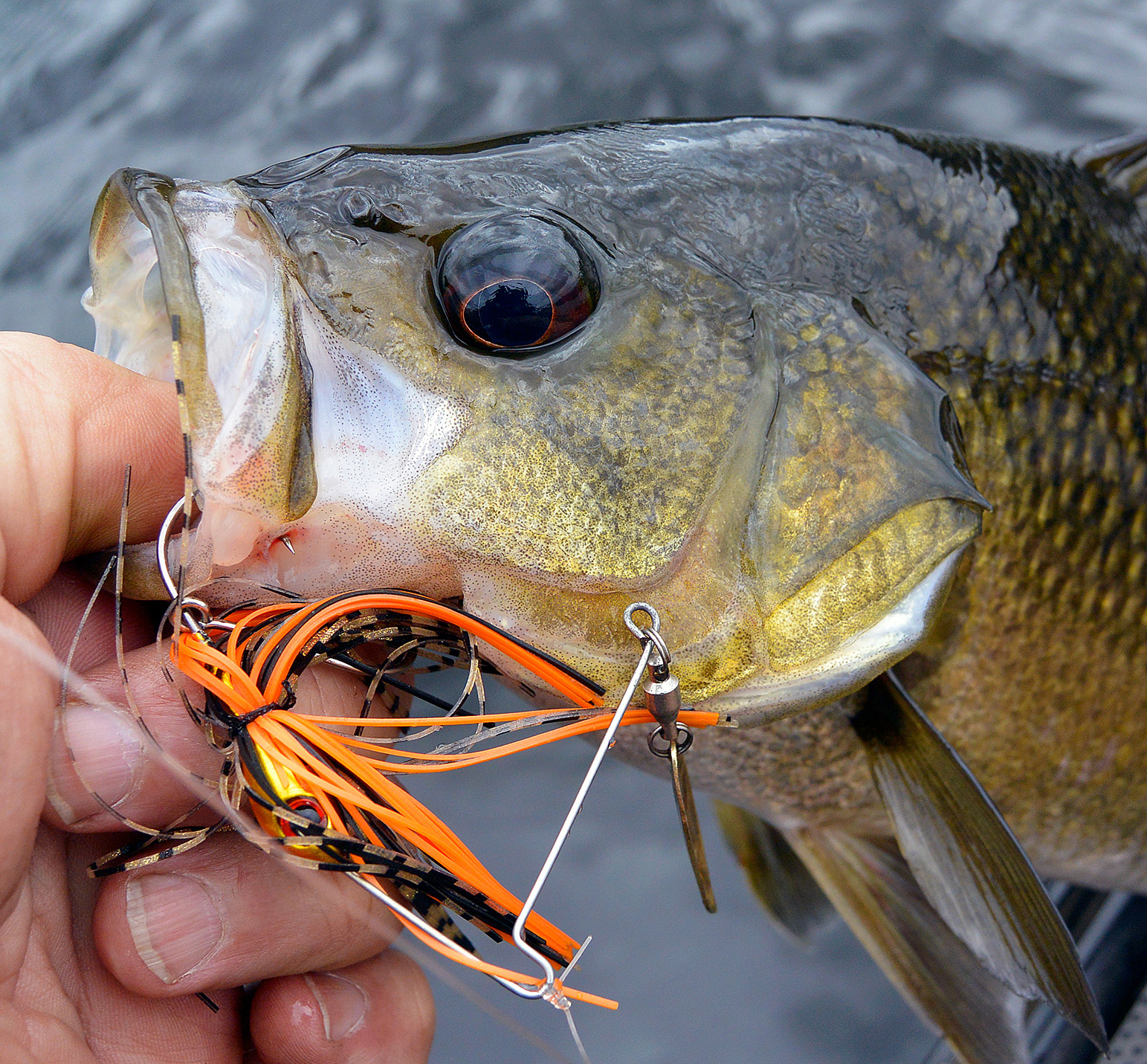 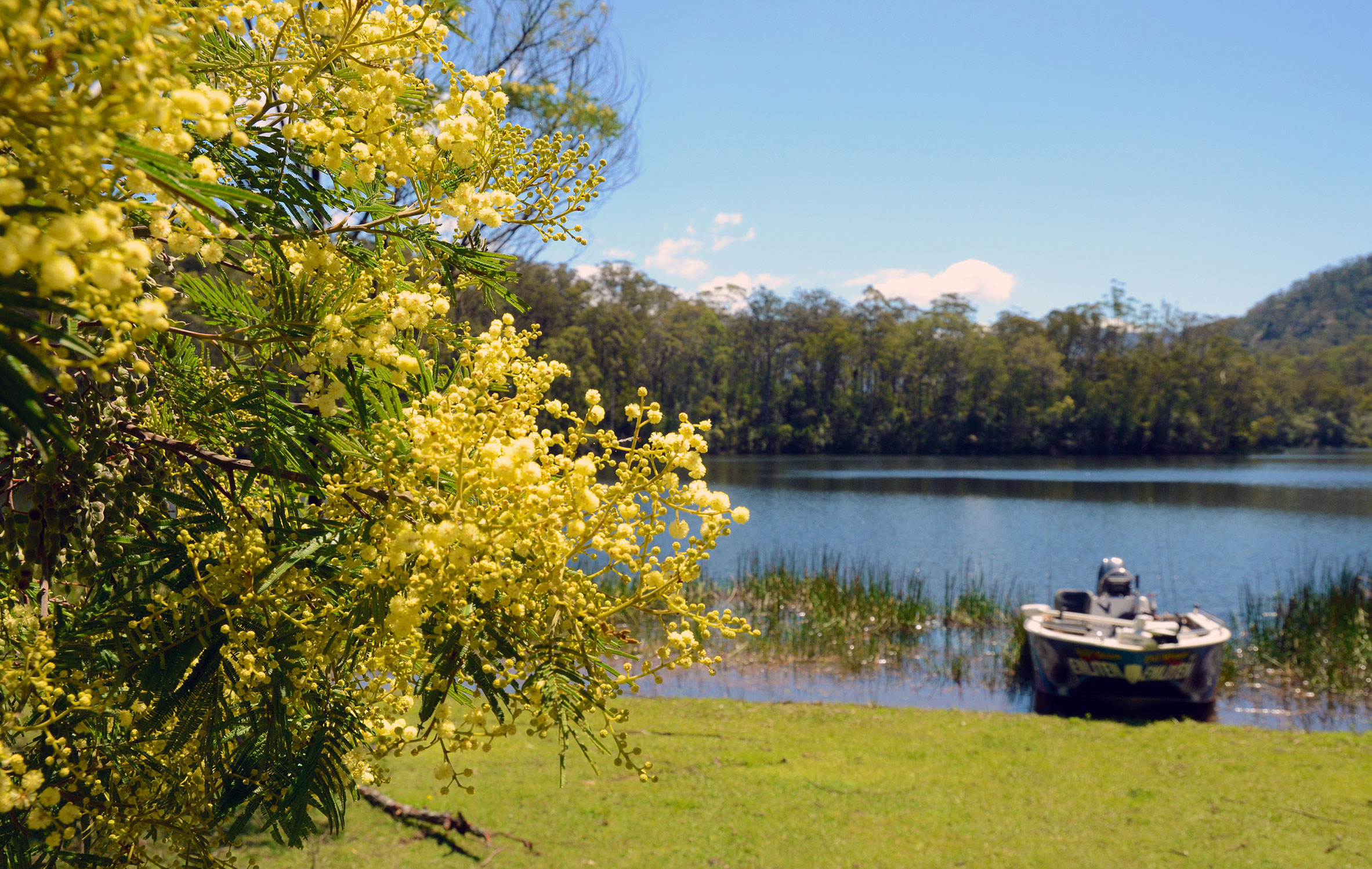 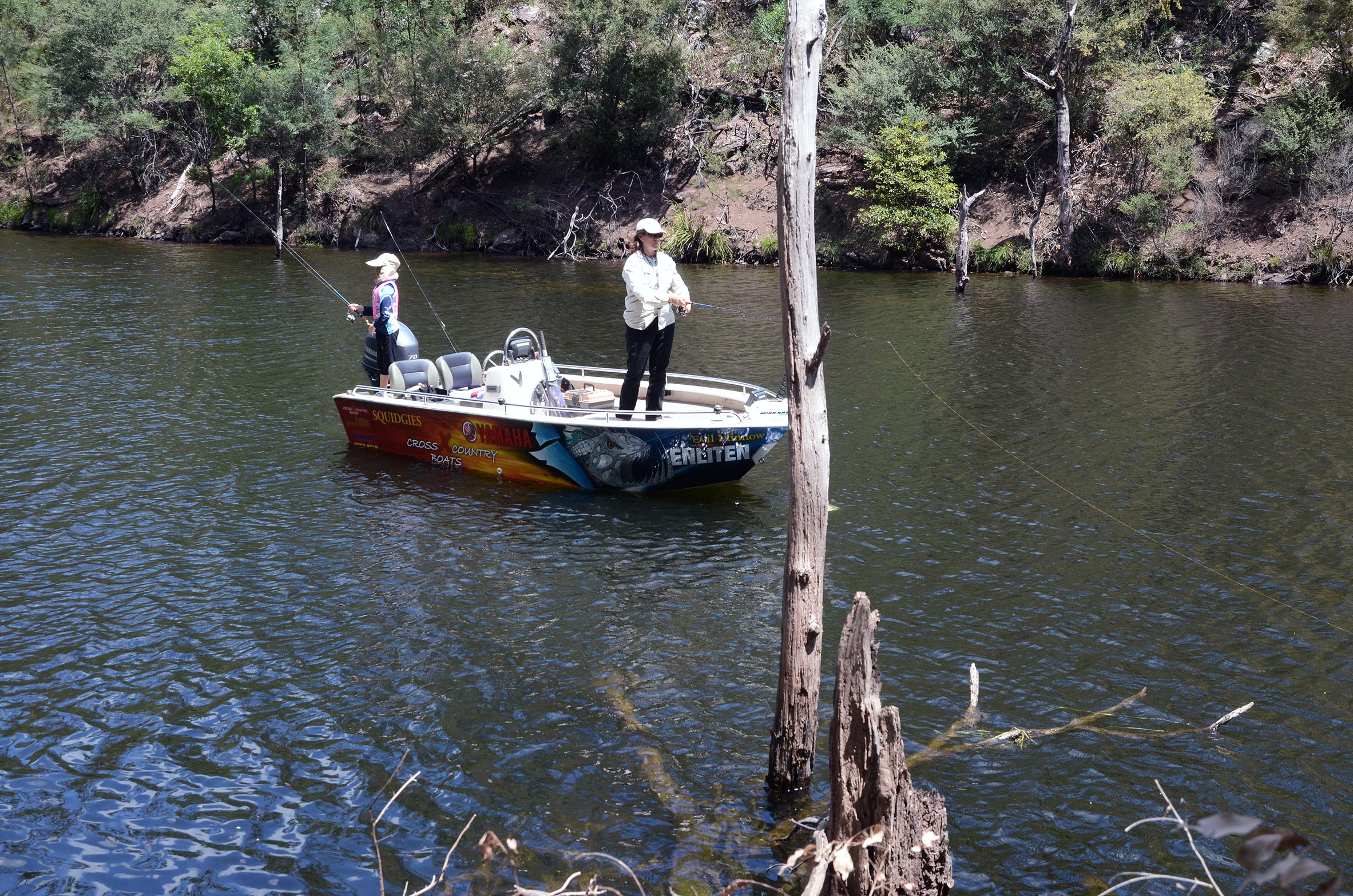 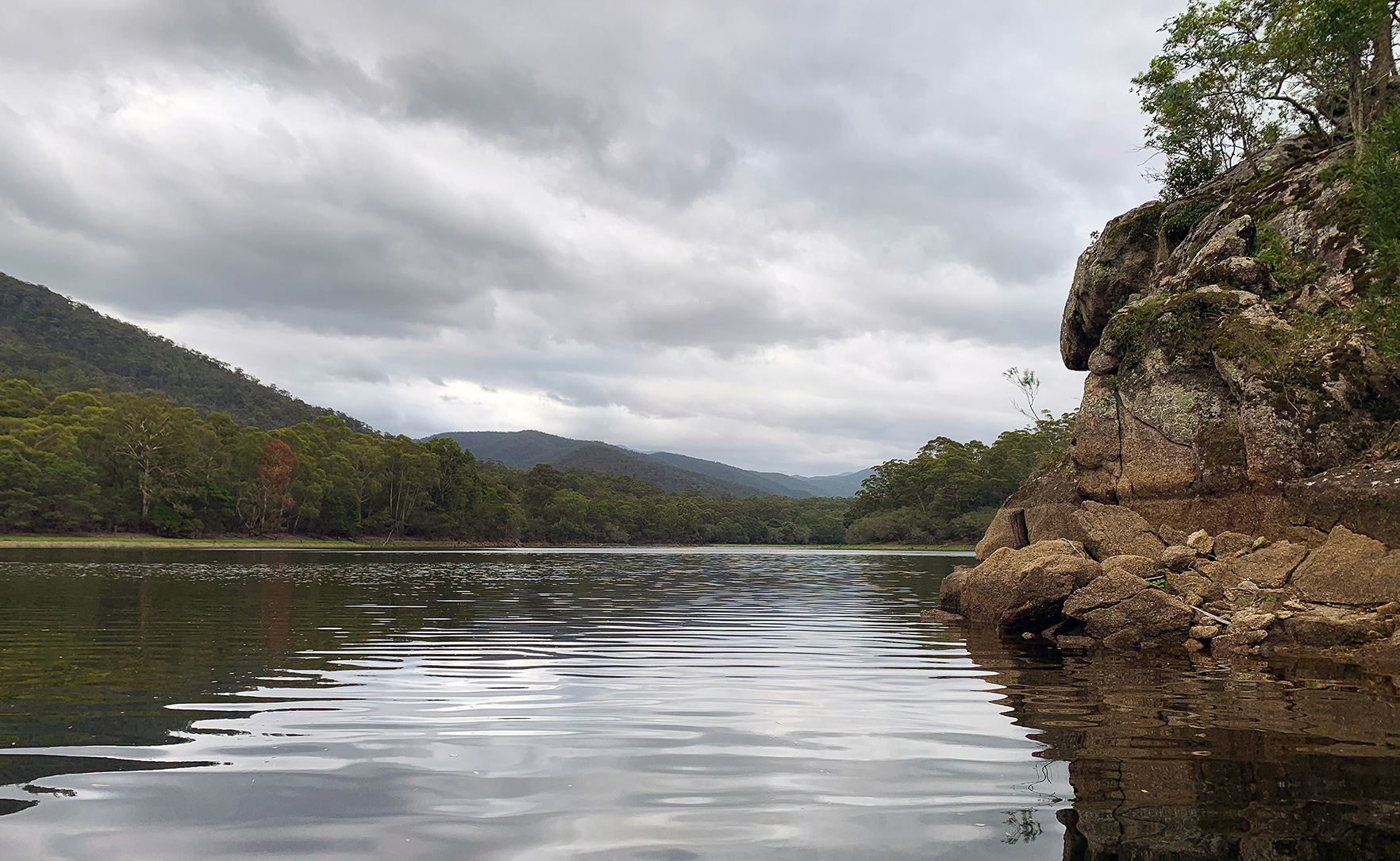 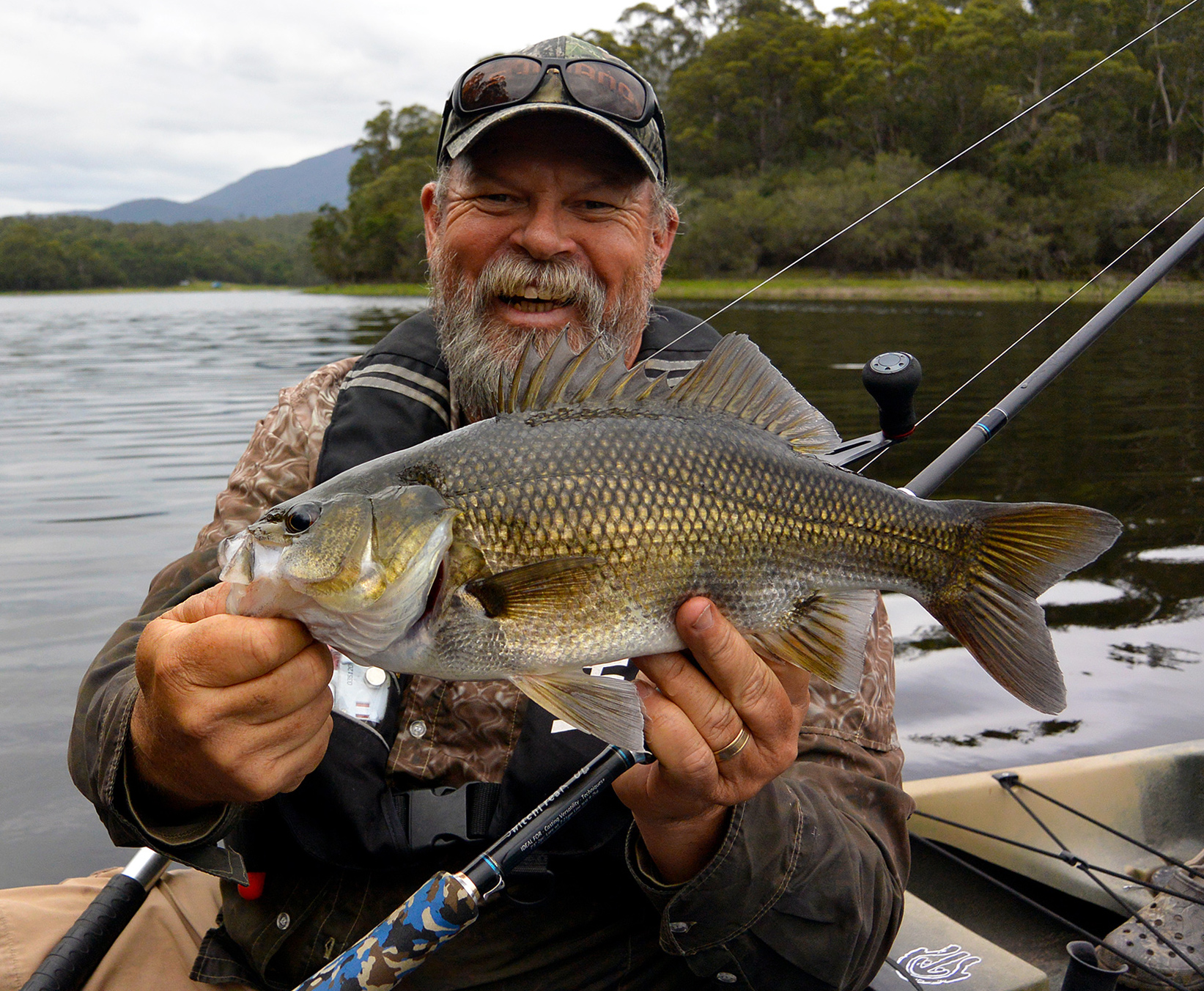 Brogo Dam is located in the rugged coastal hinterland south west of the popular seaside resort towns of Bermagui and Narooma. To reach the dam, you need to turn west off the Princes Highway onto Warrigal Range Road. (see detailed access instructions below.)

Brogo boasts a reasonably good concrete boat ramp that remains usable until the water level drops below about 70 per cent capacity. At lower levels, it’s necessary to launch straight off the steeply sloping gravel shoreline adjacent to the ramp, and this may require a 4WD vehicle, especially if your rig is reasonably heavy.

The ramp itself is concrete, one lane, narrow and moderately steep. Care should be taken not to drop the driver’s side trailer wheel off the outside edge. There’s an adequate turning area and enough parking to handle the typically light traffic outside of peak holiday periods, although things can become rather congested on a warm, sunny long weekend.

Out on the water, a blanket eight knot speed limit applies throughout this dam, and is strictly enforced. Canoeists and kayakers frequent the waterway in numbers at times, and tend to take a rather dim view of rowdy “stink boats” abusing the lake’s tranquility and ignoring the well-signposted speed limit. Be warned: offenders are likely to find an official welcoming committee waiting for them back at the ramp! Worse still, constant breaches of the rules could eventually see this waterway made into a “non-power” dam, or at least lead to the imposition of a maximum horsepower rating, which would be an inconvenient shame, so please do the right thing and keep your speed (and your wake) down.

On the other side of the coin, some of the kayakers and canoeists could definitely learn a thing or two about ramp etiquette from their power boating brethren. Parking a couple of vehicles smack in the middle of the ramp, casually unloading your craft, fitting all of its ancillary equipment and then standing around for a leisurely chat with your fellow paddlers and peddlers isn’t a great way of fostering warm relations between the two boating styles!

Brogo Dam was built across the Brogo River (a major tributary of the Bega River) by the NSW Department of Water Resources and completed in 1976. Its 43m high rock-fill wall is capable of holding back a fairly modest 9,800 megalitres of water when full. To put this into some sort of comparative perspective alongside some other small impoundments, when at its maximum capacity, Brogo holds about twice as much water as Lake Wallace on the outskirts of Wallerawang, roughly the same amount as Lake Pejar near Goulburn, and a little less than Toonumbar Dam, in the far north of the state.

Following the breaking of a terrible drought that spanned the first decade of our new millennium, Brogo Dam has been mostly full in recent years, or even overflowing… and therein lies the one major flaw in what might otherwise be a picture-perfect slice of still-water bass heaven.

After early (and largely unsuccessful) attempts to populate the backed-up waters of this dam with trout, modest bass stockings began during the 1980s. These liberations proved successful, and have continued to do so. However, with few exceptions (and despite the lake’s excellent food supplies), most of the fish encountered by anglers in Brogo Dam are modest specimens in the 20 to 35cm length range, with only a rare specimen stretching up into the low 40s.

Australian bass approaching sexual maturity will attempt to migrate downstream, especially during late autumn and winter flood events. Unfortunately, in Brogo Dam, such downstream loss of larger fish is an almost constant problem during average to wet years, with a large proportion of bass exceeding 30cm or so in length “doing a runner” over the low spillway every season.

Of course, this isn’t always the case. During and immediately following the dry years of the early 1990s and the more recent extended drought of the “noughties”, some lovely bass well in excess of a kilo were taken from Brogo. But, as they always do, these droughts eventually broke, the floods came again and away went most of the larger fish.

Largely due to the energetic fund-raising efforts and tireless work of the local self-help fish stocking group based in nearby Bermagui, bass numbers in Brogo today remain high. However, as already mentioned, most of these fish are quite small. Rumours occasionally circulate about much bigger fish being encountered. If they exist (and they probably do), these legendary bruisers are no doubt “non-migratory” or sexually dysfunctional specimens. Whatever the case, their existence — or even the whisper of it —adds a whiff of excitement and anticipation to the act of casting a line into Brogo!

The other exciting news is that NSW DPI have begun stocking hatchery-bred estaury perch into Brogo in recent years. It’ll be really interesting to see how these fish fare.

If some way could be found of preventing maturing fish (bass and perch) from constantly escaping — perhaps a net barrier of the type used at Tinaroo in Queensland  — Brogo would quickly become a genuine bass fishing heaven. The lake is jam-packed with food in the form of aquatic insects, mudeyes, shrimp, small bait fish and the like. Its bass grow fast, fit and fat and are amongst the hardest fighters for their size you’re likely to encounter anywhere. Hooking a 50cm Brogo bruiser would certainly be a memorable event!

For the moment, this remains little more than a dream or a wild hope, and visiting anglers must content themselves with tackling a string of solid little fish in the 200 to 800 gram range, instead. Fortunately, what Brogo’s bass lack in size, they more than make up for in numbers and willingness. Twenty fish days are far from uncommon here during summer, especially if the weather is kind and the barometer high.

At the beginning of December each year, the local fish stocking group hosts a very successful and friendly catch-and-release competition at Brogo and, in a typical year, many hundreds of fish are caught, recorded and released over the weekend.

Proven techniques for catching Brogo bass are primarily based on peppering obvious shoreline structures, snags, rocky drop-offs and weed bed edges with a range of vibes, blades, smaller spinnerbaits, floating/diving minnows, plugs and soft plastics, then switching to little topwater fizzers and paddlers as the sun sinks on warm, still evenings. Less energetic folk may simply prefer to troll compact deep divers parallel to the bank until concentrations of fish are encountered.

Weedless-rigged soft plastics can be especially deadly at times, especially when presented in and around the many luxuriant weed beds that prosper in the dam’s shallower margins during summer and early autumn. As a tip, fitting a little Beetle Spin style blade to any soft plastic will almost always improve its appeal to these fish.

Fly fishing is also a perfect approach for these fish, either with sub-surface shrimp and streamer patterns or topwater poppers and gurglers early and late in the day. In light of the modest average size of the fish, trout-weight tackle will do the job nicely.

As mentioned earlier, there are also some shore fishing options available here, both to the left of the ramp (in and beyond the first bay) and on the far side of the dam wall. These areas are suited to fishing families, but be aware that snakes are reasonably common here in the warmer months.

While the edges are rich in structure, large expanses of Brogo Dam are quite deep and relatively featureless. No doubt the lake’s bass school up and suspend in this open water at times here, as they do elsewhere, but to the best of my knowledge, little work has been done in this waterway using the vertical lure and fly presentation strategies honed on Queensland’s suspended impoundment bass. No doubt they’d produce the goods, but on most days between late October and April, they’re not really needed. Keeping it simple works just as well or better.

With its healthy crop of bantam-weight bass, Brogo Dam probably won’t quicken the pulse of too many Lake Glenbawn or St Clair veterans in search of their next 50cm-plus trophy, nor will it draw the Banana-benders away from their rich collection of big bass dams. All the same, this is a delightful little fishery nestled in some truly magical country, and has special attractions all of its own, from rock gorge walls draped in wild orchids to huge goannas ambling up rocky banks and nonchalant ’roos lazily scratching their fat bellies or cocking an ear at passing anglers in the golden glow of late afternoon.

If a little time spent in the slow lane flicking lures or flies at willing, darkly immaculate 25 to 35cm bass (with always the chance of a fat 40-plus jumping on) sounds rather tempting, keep an eye peeled for that easy-to-miss Brogo Dam turn-off on the Princes Highway between Bega and Cobargo… It’s a truly wonderful part of the world! 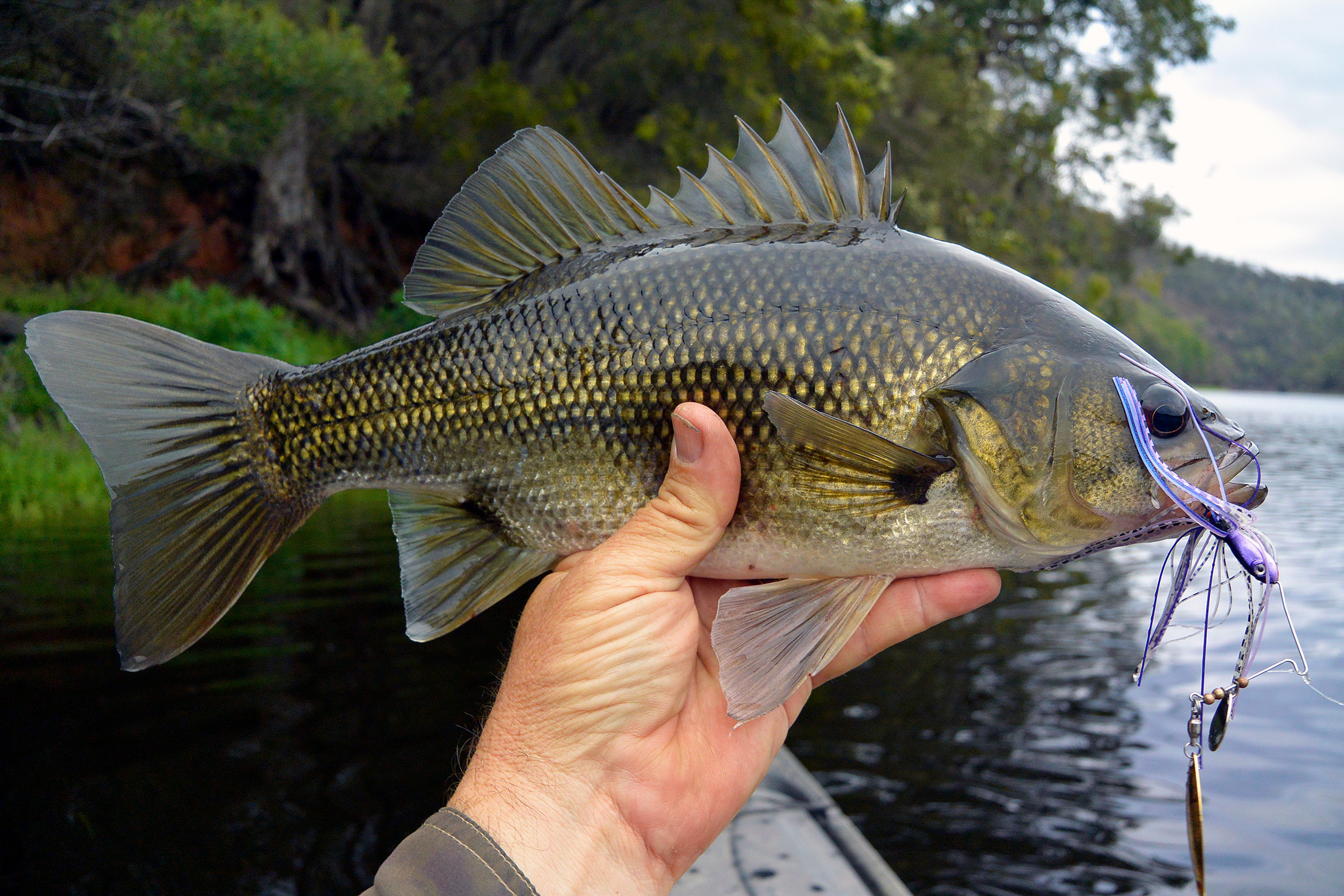 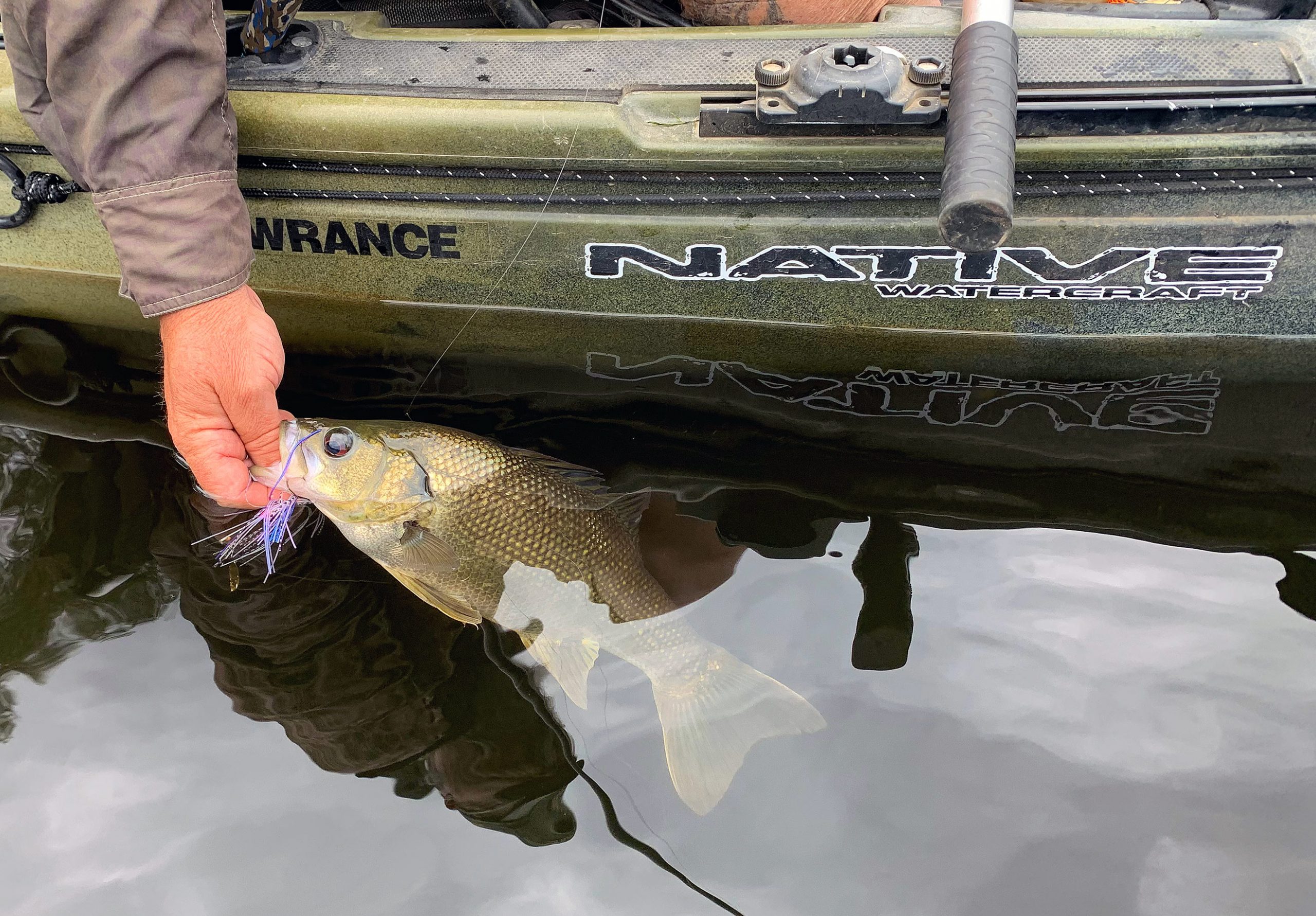 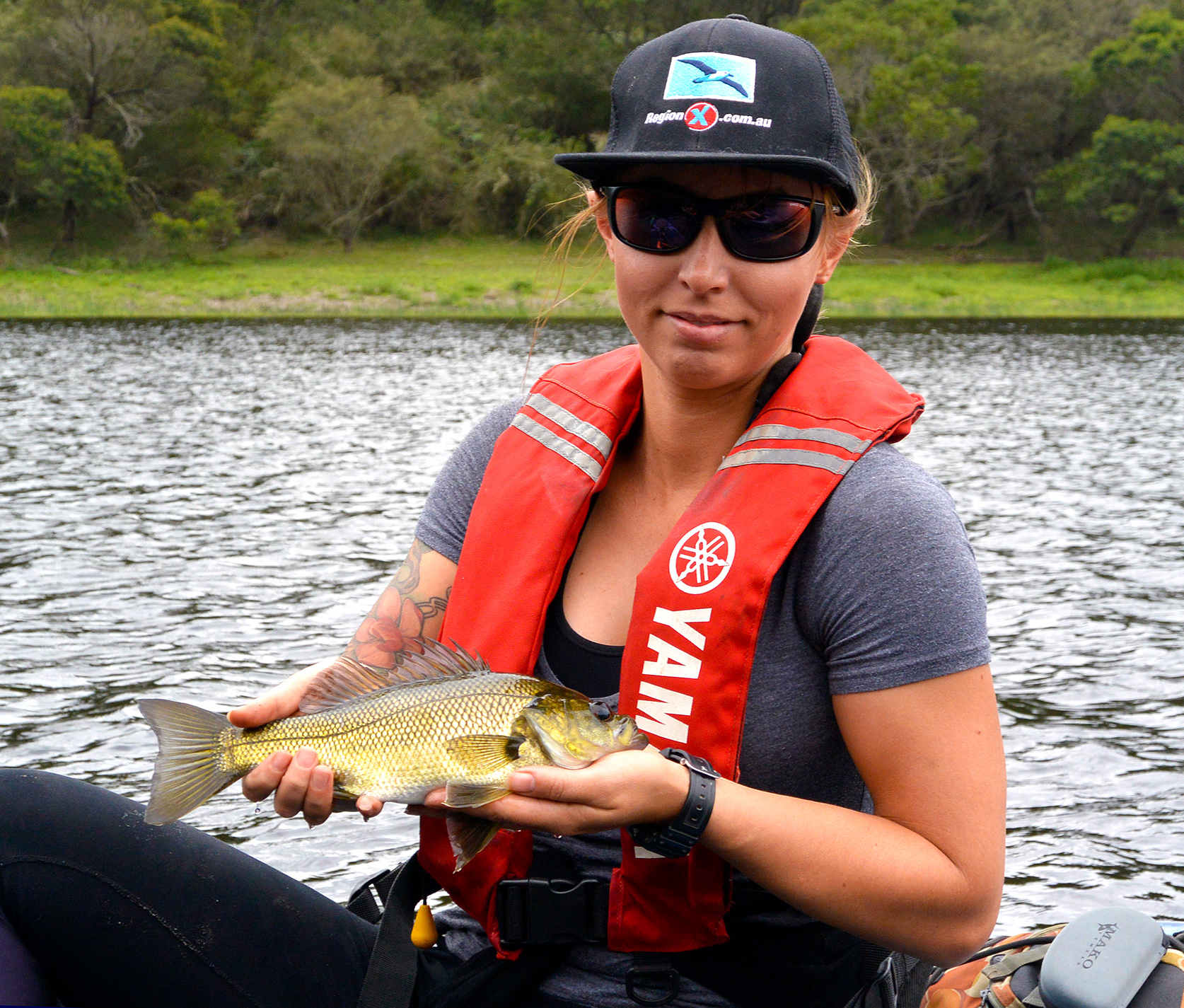 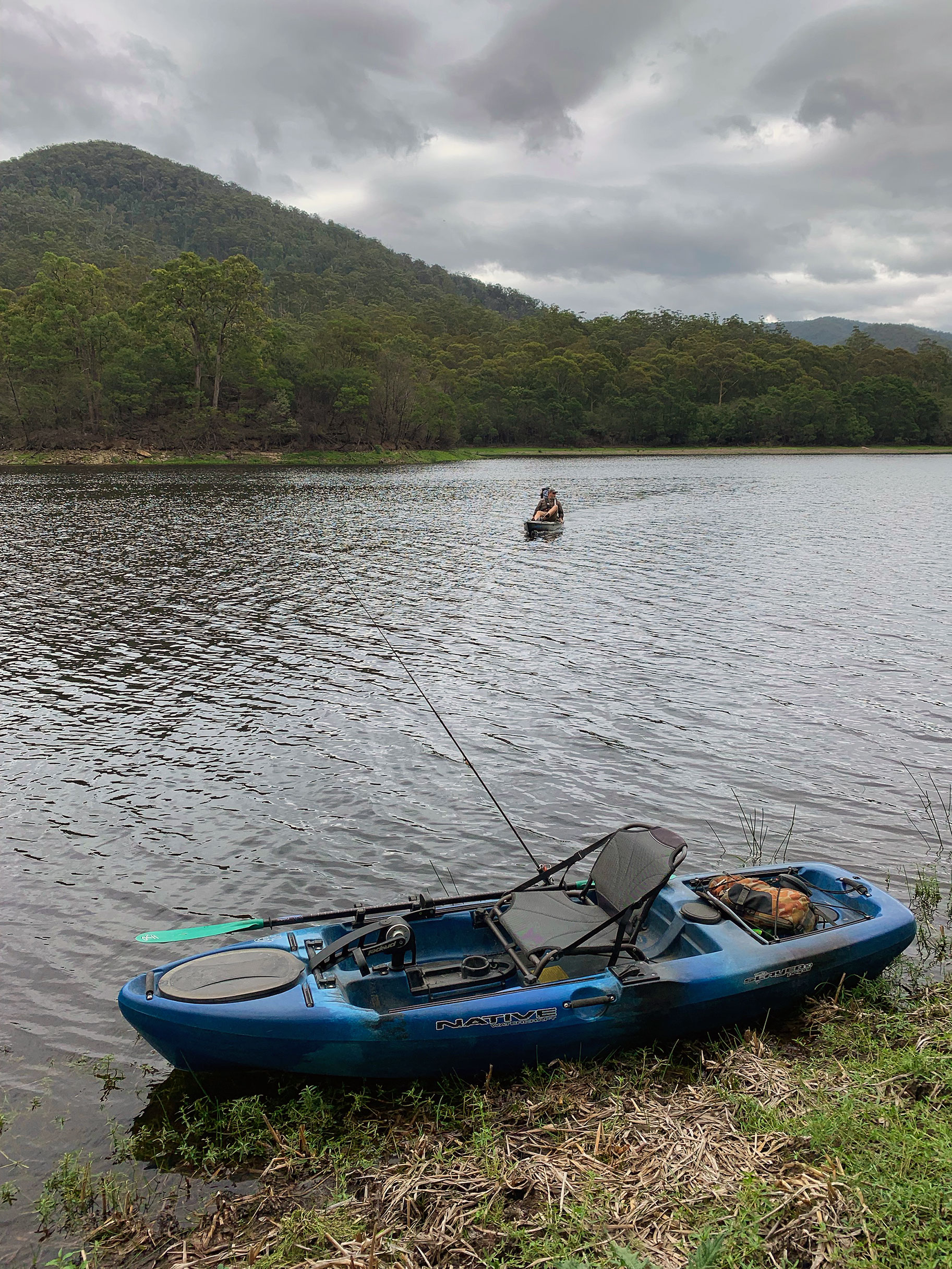 Warrigal Range Road turn-off lies approximately 18km north of Bega and 24 km south of Cobargo, or 62km south of Narooma. Coming from the north,  watch for the turn on your right as you climb into the hills after crossing the Brogo River. If you’re travelling from the south and reach the highway bridge over the Brogo, you’ve gone too far!

Once you turn off the highway onto Warrigal Range Road, it’s about 11km to the public reserve at the dam. Just over half of this final stretch consists of a winding dirt road that’s usually in pretty good shape, but may become a little cut up after heavy rain. Be alert for wildlife and stock on this road, especially at dawn and dusk.

Slow down on entering the reserve area and follow the signs. Straight ahead takes you onto the dam wall itself and across to a parking area on the far side that offers access to the northern side of the lake for shore fishers. If you’re headed for the boat ramp, you need to turn left at the top of the hill, before the dam wall access road.